Roxborough, Pomerance, Nye & Adreani is thrilled to announce the appointment, by Speaker of the Assembly, Anthony Rendon, of its partner, Nicholas Roxborough, to the California Commission on Health and Safety and Workers’ Compensation (CHSWC). The Commission is a statutorily created joint labor-management body charged with examining the health and safety and workers’ compensation systems in California and recommending serious administrative or legislative modifications to improve their operation. 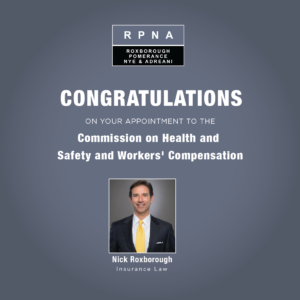 Throughout his legal career, Mr. Roxborough’s impact on the workers’ compensation industry in California, and throughout the nation, is without parallel. With this Commission appointment, Mr. Roxborough is looking forward to even greater involvement and influence in examining California’s workers’ compensation system, as well as the state’s activities to prevent industrial injuries and occupational illnesses, and working closely with his co-Commissioners to recommend administrative or legislative modifications to improve their operation. “I am honored by the Speaker’s appointment to this extraordinary Commission and to hopefully play a small, but meaningful role in California’s continuing evolution of making its workers compensation system one that serves the interest of all stakeholders,” said Mr. Roxborough.

Nicholas Roxborough is a longtime advocate of public service and community involvement. He has served as chairman of the Board of Governors for Momentum (formerly United Cerebral Palsy of Los Angeles) from 2012 to 2016, and chairman of the Board of Directors from 2009 through 2021. In 2013, he was appointed to the California Organized Investment Network Advisory Board by then-insurance Commissioner Dave Jones, and more recently by current insurance Commissioner Ricardo Lara. Previous to this appointment, Mr. Roxborough served the city of Los Angeles as a commissioner with the Police Permit Review Panel, the El Pueblo de Los Angeles Historical Monument Authority, and, in March 2019, Mr. Roxborough was appointed by Mayor Eric Garcetti to the LAX Board of Airport Commissioners.