LOS ANGELES, CA, July 3, 2014—Nick Roxborough was appointed by Los Angeles Mayor Eric Garcetti to serve as a Commissioner on the Police Permit Review Panel. He was approved by the Los Angeles City Council and sworn in as a Commissioner on July 1, 2014. He was later elected chairman of the PPRP in July 2016. The Panel is responsible for issuing and overseeing a wide variety of Police Permits for businesses, including ruling on cases involving the discipline or revocation of permits and approving stipulations in the settlement of disciplinary cases.

Roxborough also serves on the California Organized Investment Network (COIN) Advisory Board, which he was invited to join by Insurance Commissioner Dave Jones last year. COIN supports leadership to increase insurance industry investment in underserved and rural communities throughout California. 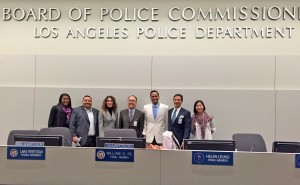